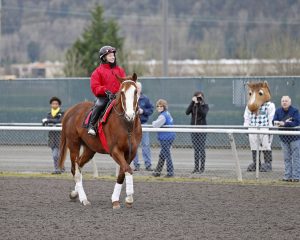 Barkley and Mach One Rules renew their rivalry Saturday in the $21,500 allowance feature for 3-year-olds and up at 5 ½ furlongs.

In three meetings last year, Barkley defeated Mach One Rules by two heads and a neck while winning the Auburn, Coca-Cola and Seattle Slew Stakes, and was voted Emerald Downs’ champion 3-year-old colt or gelding. Barkley’s first career defeat was by a head to Opportunistic in the Emerald Downs Derby at 1 1/8 miles—3 ½ furlongs farther than Saturday’s comeback race, which is designed as a prep race for the $50,000 Governor’s Stakes on May 21.

A 4-year-old Kentucky-bred by Munnings, Barkley is 6-1-0 in seven starts with earnings of $149,275 for Rising Star Stable III and Howard Belvoir. Saturday marks his first start since the heartbreaking defeat to Opportunistic on August 1, 2016, a head decision that curtailed an otherwise perfect season and career.

Belvoir led all trainers in stakes wins last year with seven—three apiece by Barkley and So Lucky and one by The Press (who also races in Saturday’s feature).

“It’s hard for me to repeat last year and it’s hard for the horse to repeat,” Belvoir said. “If I had to guess, he lays just off of ’em like he always does. That’s his style.”

According to Emerald Downs’ line maker Rob Rao, the betting public figures to narrow the six-horse field to three main choices– Barkley 8-to-5, Mach One Rules 2-to-1 and Prime Engine 5-to-2.

Winner of the 2015 Emerald Downs Derby and 2014 Gottstein Futurity, Prime Engine has trained this spring at Pegasus Training Center and makes his first start since an 11th to Point Piper in the 2016 Longacres Mile. 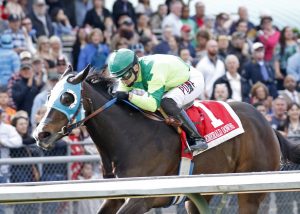 The race, designed as a prep for the $50,000 Hastings Stakes on May 20, drew a field of seven runners including five Emerald Downs stakes winners: B C Z Middleton, Princess Kennedy, My Heart Goes On, Perhaps a Pie and Invested Prospect.

Although she has never faced older fillies and mares, the Blaine Wright-trained Invested Prospect is one of the fastest sprinters on the grounds. Her career record is 6-0-0 in seven starts with earnings of $108,150 for John and Janene Maryanski and Riverbend Farm.

Invested Prospect is six-for-six in sprints and has never been behind a horse in a one-turn race, an amazing record that includes a 2 1/2 length victory in the $50,000 Seattle Stakes at Emerald Downs. She finished off 2016 with a pair of six-furlong allowance wins, one on dirt at Pleasanton and the other on synthetic at Golden Gate.

Princess Kennedy has been an Emerald Downs champions the last two years, earning Top 2-Year-Old Filly in 2015 and Top 3-Year-Old Filly last year when she rallied for a neck victory in the $79,000 Washington Oaks.

Last year as a 3-year-old, B C Z Middleton rallied to defeat older horses including Ethan’s Baby in the $50,000 Washington State Legislators Stakes.

My Heart Goes On won the Angie C Stakes as a 2-year-old in 2015 and the Washington Cup 3-Year-Old Filly Stakes last year. 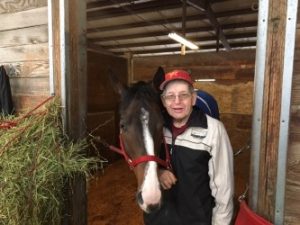 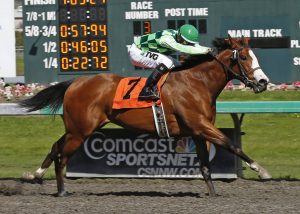 FINISH LINES: Always Enuff, a 10-length debut winner last week, is headed for the $50,000 Seattle Stakes for 3-year-old fillies on Sunday, May 7, according to trainer Tim McCanna. . .So Lucky came out of Sunday’s third place finish in good shape and is moving forward to the $50,000 Auburn Stakes for 3-year-olds on Sunday, May 14. “He should get something out of (Sunday’s race),” trainer Howard Belvoir said. . .Jockey of the Week Eliska Kubinova, who rode three winners Sunday including a pair for 93-year-old Don Munger, Kubinova has a knack for winning in bunches. She twice has won four in a day at Emerald Downs, and as an apprentice she had both a six-win day and five-win day at Portland Meadows. . .Jockey Leonel Camacho-Flores needs two wins to reach the 500 career wins milestone. . .He’s Cagey, the only horse to win six races at Emerald Downs in 2016, makes his season debut in Friday’s feature race for $10,000 claimers at six furlongs. An 8-year-old Idaho-bred gelding, He’s Cagey was 6-1-1 in nine starts with $42,175 in earnings last year while racing for trainers Blaine Wright and Candi Tollett. He’s Cagey was claimed for $10,000 in his final start last year and is a waiver claim Friday for Roy Lumm and co-owner Janet Johnson. . .Hastings Racecourse begins its 2017 season Sunday with the $50,000 Brighouse Belles for older fillies and mares and $50,000 Swift Thoroughbreds Inaugural for 3-year-olds and up. Defending champion Modern is the 5-2 morning line choice in the Inaugural while Opportunistic, who defeated Barkley in the 2016 Emerald Downs Derby is listed 6-1 third choice in the full field of 11. . . Nominations close today for the $100,000 San Francisco Mile (G3) for 3-year-olds and up on Saturday, April 29. Three-time Washington Horse of the Year Stryker Phd is expected to run in the one- mile turf race. . .Stephanie Loffredo, a Las Vegas native who owns horses with trainer Jeff Metz, will sing the national anthem before Friday’s races. . .Sun Downs in Kennewick begins its annual six-day meeting Saturday with a 10-race card of Thoroughbreds and Quarter Horses. . .Jake Samuels is the defending riding champion and Robert Lawrence the defending training champion. . .Congratulations to Gary Dougherty, a.k.a. “Trifecta King”, for delivering his first hit of the season—Sunday’s ninth race payout Grand Palais, Togrammashousewego, Silvertown) grossed $559.60 on a $34 investment. Nice work, TK!