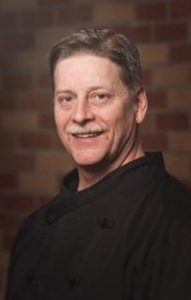 A Puyallup native, McLean brings over three decades of his experience to Emerald Downs. A graduate of the Culinary Institute of America in Hyde Park, NY, McLean will be responsible for developing a menu and all activities that occur in the kitchen/dining operation.

McLean most recently served as Culinary Professor and leader of the ACF accredited Culinary Arts Program at South Puget Sound Community College. He had a 10-year stint with Ram International in the Position of Regional Chef overseeing operations in nine of the company’s restaurants that employed 250 culinarians in 5 different cities in two states. He also was Executive Chef at Marcus Whitman Hotel and Conference Center in Walla Walla, Chef for Masa Restaurant and and Mobile Food Command Vehicle, and Chef Consultant for Cals American Grill.

“Scott exhibits the rare traits of being formally trained in culinary arts and the ability to lead, develop and grow businesses,” Fraser said. “I look forward to him leading our kitchen.”