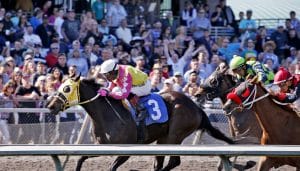 The race dates were approved Thursday at the Washington Horse Racing Commission meeting. The 70-day season takes place over 24 weekends which is one more than 2016. Live racing is scheduled Saturday and Sunday only during the first and last two weeks of the season, with Friday racing beginning April 21 and continuing thru September 1. There will be two Mondays of racing, July 3 and May 29.

The 21st anniversary season begins with a bang, literally, as a fireworks display will follow the opening night races with a special 5 p.m. post.

“We’re excited to prepare for the 2017 season,” Emerald Downs President Phil Ziegler said. “We are planning some exciting new promotions including Corgi Races to complement popular ones like Indian Relay Racing, Wiener Dogs, Food Truck Festival and Washington Cup. We’ll also have two fireworks shows, the traditional July 3 show which attracted over 13,000 people this year, and a new one on opening night.”

“Most importantly, we hope to continue our upward trends on the racetrack. It all begins and ends with our live racing product.”

The 2017 stakes schedule featuring the 82nd running of the Longacres Mile (G3) will be released in January, and the stable area opens Wednesday, February 1. More information is available at www.emeralddowns.com or on the track’s Facebook page.