STRYKER UP THE BAND, MILE CHAMP RETURNS SUNDAY IN $50,000 BUDWEISER

One of the greatest Thoroughbreds in state history makes his 2016 debut Sunday when Stryker Phd heads a field of 11 older horses in the $50,000 Budweiser Stakes at one mile.

Thus begins a quest for an unprecedented third straight Longacres Mile for the 7-year-old Washington-bred gelding. It also marks the third straight year Stryker Phd has made his season bow in the Budweiser; he rallied from ninth to win the 2014 Budweiser in a stakes record 1:34.15 (97 Beyer) and rallied from 11th to take last year’s race in 1:35.57 (95 Beyer).

All told, Stryker Phd has won a record-tying eight straight stakes at Emerald Downs and enters Sunday’s race No. 8 all-time in state earnings with $518,081 and No. 3 in track history with $469,476.

Although he resumed training in December at Golden Gate Fields, Stryker Phd had to overcome some relatively minor issues en route to his 2016 debut. Along the way he has logged 13 workouts, seven at Golden Gate and six at Emerald Downs, and assistant trainer Sharon Ross said Stryker is ready for action.

“It has taken a long time to get him ready but actually he’s peaking,” Ross said. “He’s coming up to the race really good. He’s had some stops and starts. He’s had a little issue with an infection and he got another cold the other day, but that all seems to be cleared up now.

“He’s still as big and strong as he was last year. He’s probably a little more anxious to get going since he’s been in training since Thanksgiving. I think he’s ready to get back on a roll again.”

Sunday’s race is far from a free square, however.

O B Harbor enters the fray on a big high, rolling to a 4 ¼-length victory in the May 22 Governor’s Stakes, running 6 ½ furlongs in a stakes record 1:13.59 and earning a career-high 98 Beyer. Noosito, runner-up in last year’s Budweiser, also is back for another crack at the champ, while 2015 Emerald Downs Derby winner Prime Engine and Northwest newcomer The Sandman add depth to the race.

As for pace, Kaabraaj—who set a state record of 1:06.86 for six furlongs in April—figures to blast off from the No. 1 post-position.

Betting favorites are 0-for-6 in stakes this year at Emerald Downs. Second betting choices have dominated, winning 5-of-6 including O B Harbor at 3.20-to-1 in the Governor’s Stakes.

Emerald Downs will celebrate its 20th Anniversary on Monday, June 20 to commemorate two decades of Thoroughbred racing in Washington State.

As a tribute to the inaugural season, Emerald Downs will roll back to 1996 prices for admission, parking, programs and food. Between races, the track will recognize several of its most dedicated contributors over the past 20 years including a ceremony after race one for the track’s top horsemen.

Several other familiar faces will be seen throughout the evening’s festivities including Longacres Mile winners No Giveaway, Flamethrowintexan, Wasserman and Noosa Beach. The four runners will parade on track and into the Winner’s Circle after race three at approximately 7:51 p.m.

Gates open at 4:30 p.m. with first post time at approximately 6:35 p.m. Weather projections say sunny skies for Monday with highs in the low-80s.

The $0.20 Pick 7 and the $0.50 Pick 5 will have the attention of handicappers as both exotic wagers have sizable carryovers heading into Friday’s seven-race card.

The Pick 7, introduced this season at Emerald Downs, takes a three-day carryover of $7,180 into Friday and covers every race on the card. Meanwhile, the Pick 5, which starts in race three, will tempt handicappers with its $6,078 carryover.

The average field size for Friday’s card is 9 horses per race and concludes both the Pick 7 and Pick 5 with a 12-horse field. First post is at approx. 6:35 p.m.

The 45-minute program will showcase every stakes race this season including Sunday’s $50,000 Budweiser Stakes and Monday’s $50,000 Washington State Legislators Stakes.

Hosted by Jacob Pollowitz (Professor Pollowitz) and Vince Bruun (Mr. Media), The Press Box Podcast this week is a special preview edition and will be posted at emeralddowns.com by 5 p.m. on Friday. The podcast handicapping analysis, stakes history and an interview with assistant trainer Sharon Ross, who talk about the return of two-time Horse of the Year Stryker Phd. 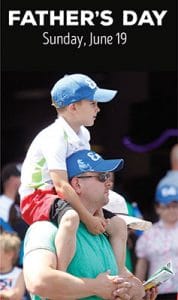 Dads will have an added incentive between races with a chance to compete in the Star 101.5 Father’s Day putting contest.

There will also be prize drawings for numerous gifts including the grand prize of a “Day at the Races” in the track Belmont Suite for up to 10 people with a personal mutuel teller and food service. 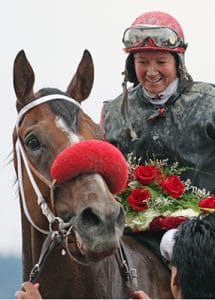