Sunday’s $50,000 Kent Stakes marks round three for 3-year-old fillies and we’re already guaranteed a third different winner in the series, as neither Invested Prospect, gate-to-wire winner of the Seattle Stakes, nor Princess Katie, last-to-first winner of the Irish Day Stakes, is entered in Sundays 1 1/16-mile race.

My Heart Goes On, named state champion 2-year-old filly of 2015, and Princess Kennedy, voted Emerald Downs’ champion 2-year-old filly of 2015, appear the ones to beat. My Heart Goes On ran brilliantly in the Irish Day, shaking off Invested Prospect on the last turn and opening a three-length lead past mid-stretch, only to be nailed in the final jump by Princess Katie. Princess Kennedy also ran a big race in the Irish Day, rallying from 12 lengths back to finish third in an improved effort.

Brookys Star, fourth in the Irish Day, ran fairly well considering it was her first start at Emerald Downs. A daughter of Giants Causeway owned by Steve Reger’s Jethorse LLC, Brookys Star is the most experienced router in the seven-horse field with six two-turn races on her resume, including her maiden victory in a $24,000 maiden special weight last year at Fresno.

“She ran just kind of an even race last time,” Sodergren said. “I was looking for a little more but I wasn’t too disappointed since it was her first try here. She’s been here a little longer so I have had more time to gear her down and train her up to this race. We just hope they have a little duel up front and we can sit back there casually before we run them down.”

Incidentally, Sodergren and wife Tammy are Emerald Downs’ Owners of the Week, as their 3-year-old gelding You Mad Bro raced to a 5 ½-length maiden victory last Saturday.

· Betting favorites are 0-for-8 in stakes this year at Emerald Downs. Second betting choices have dominated, winning 6-of-8 including 3-year-old fillies Invested Prospect at 3.50-to-1 in the Seattle Stakes and Princess Katie at 3.80-to-1 in the Irish Day Stakes.

The Pick 7, introduced this season at Emerald Downs, includes all seven races on Friday’s card featuring four races at the $15,000 claiming level and above. The “ALL” button might be needed for Friday’s feature race which boasts seven older fillies and mares in a $25,000 claimer at 6 1/2 furlongs. First post is at approx. 6:35 p.m.

The 45-minute program will showcase every stakes race this season including Sunday’s $50,000 Kent Stakes and an interview with assistant trainer Robert Sodergren who saddles Brooky’s Star.

GET LUCKY ON CELTIC WEEKEND @ EmD

Scottish Day and Irish Day have been combined to form one exciting weekend of Celtic tradition, which also includes a nine and 10-race card of live Thoroughbred racing, respectively.

On Saturday and Sunday, Celtic Weekend features traditional Irish and Scottish dancers that will perform between races, Irish Wolfhounds and the popular Crabbie’s Beer Garden. There are plenty of activities for kids who can enjoy pony rides, a bounce house and more.

The gates open at 9 a.m. for simulcasting and first post for live racing is approximately 2 p.m.

July 9 Breakfast at the Wire

July 9 Ladies Night at the Races 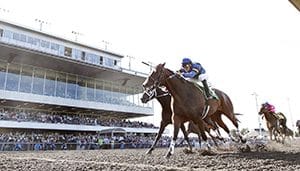 Jose Zunino winning aboard O B Harbor in Sunday’s Budweiser.

FINISH LINES: Trainer Chris Stenslie said O B Harbor emerged from his victory in the Budweiser Stakes in great shape and resumed training Wednesday. The 4-year-old Oregon-bred is enjoying a remarkable meet, producing meet-fastest times in all three starts to date. . .David Martinez, trainer of runner-up Betrbegone and fifth place finisher Dedicated to You, said both of his 4-year-olds are fine and will proceed to the $50,000 Mt. Rainier Stakes at 1 1/16 miles on Sunday, July 17. Betrbegone was only beaten a half-length while Dedicated to You rallied late after delaying the start with antics at the gate, and both figure to relish an additional half-furlong. . .Stryker Phd, his eight-race Emerald Downs win streak snapped, came out of the race well and returned to the track Thursday, trainer Larry Ross said. . .Cassie Papineau, who rode 70 winners here as an apprentice in 2009, saddles her first starter as a trainer, Atta Boy Lucky, in Saturday’s fifth race. A 28-year old native of Kennewick, Papineau last rode here in 2013, winning on 9-of-104 mounts, and has been working mainly as an exercise rider. . . Emerald Racing Club is in action Sunday as Archie Graham drew the No. 10 post in race seven for $10,000/$8,000 claimers at 1 1/16 miles. . .Saturday’s card represents the half-way point of the 70-day meeting. . .Nominations close Saturday for the $50,000 Seattle Slew Stakes for 3-year-old colts & geldings at 1 1/16 miles. To be run Sunday, July 3, the Seattle Slew is Round 3 of the budding rivalry between Mach One Rules and unbeaten Barkley. . .July 3 also features the Fireworks Spectacular, presented by Carl’s Jr. Gates open at 9:45 a.m., and this year Emerald Downs will present movies on the big screen for early arrivals, including Black Beauty, Dreamer and Racing Stripes