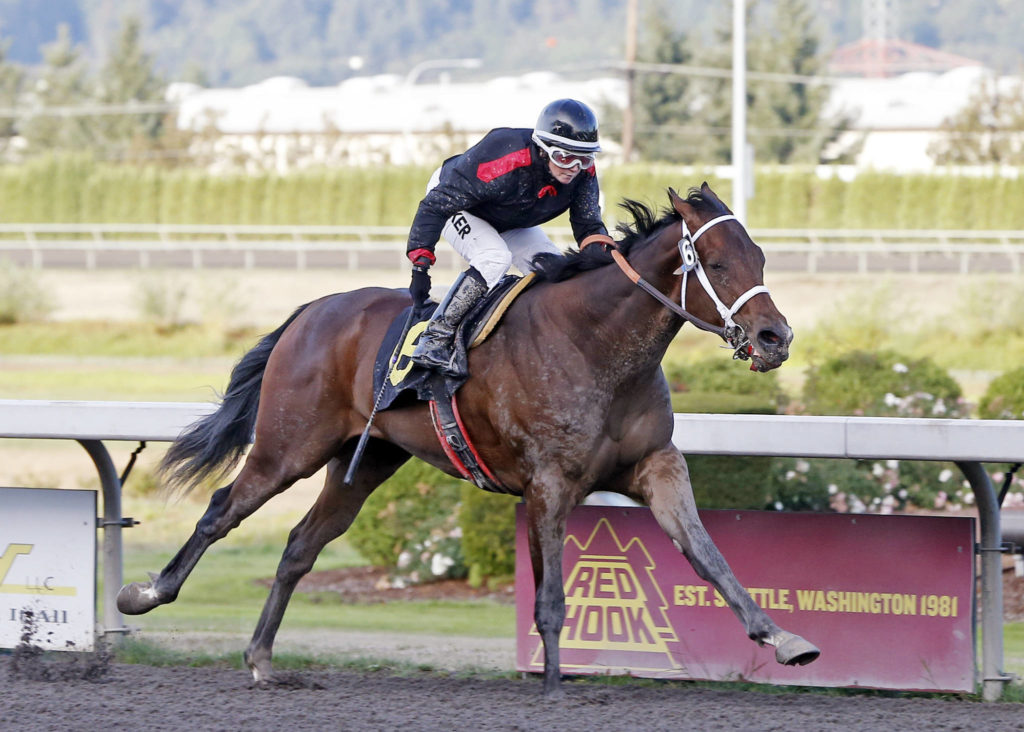 Belvoir now has 43 stakes wins at Emerald Downs and 16 with 2-year-olds, but Elliott Bay represents his first in the Gottstein.

“The Gottstein’s a special race and a big race, kind of like the Longacres Mile, so this is a very special win,” Belvoir said.

Perfectly ridden by Whitaker, Elliott Bay stalked the filly Diamonds R through six furlongs in 1:11.41, pounced to a 3 ½-length advantage past mid-stretch, and held off a strong rally by Trump Itz for the victory.

“He’s a push-button horse, just so much fun to ride,” Whitaker said. “We had a perfect trip.”

For Elliott Bay, a Washington-bred by Harbor the Gold-Melba Jewel, the Gottstein winner’s share is a hefty $52,250. His overall record is 2-2-0 in five starts—including two stakes wins—and $90,687 in purses. The Gottstein also clinched honors as the track’s Top 2-Year-Old Colt or Gelding.

Trump Itz, with Julien Couton riding, produced a solid stretch run to finish second and paid $3.80 and $3.20. It was six lengths back to Hey Sequoia, ridden by Leonel Camacho-Flores, and a $5.40 show payoff.

Diamonds R and Frisky Bear, the two fillies in the lineup, checked in fourth and fifth, and My Heart Awakens, Winning Bluff and Aceinthehole, completed the order of finish.

My Heart Awakens—favored by a scant $256 over Elliott Bay in the wagering— was slammed at the break, dropped back to last early and was never seriously involved in the race. 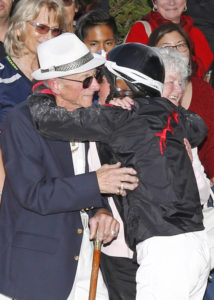 NOTES: Mach One Rules was voted 2017 Horse of the Meeting, becoming the 14th Washington-bred in 22 years to capture the honor. Owned by REV Racing and trained by Frank Lucarelli, the 4-year-old Harbor the Gold gelding compiled three stakes wins and led the meet with $135,250 in earnings. . .Rocco Bowen won his second straight riding title with 126 wins—up 16 wins from last year—and averaged 1.75 wins per day. . .Blaine Wright captured his second straight training title with 53 wins—14 better than last year—and set a track record with a 35.8 win percentage. . .Julien Couton rode four winners Sunday and edged Kevin Orozco 65-63 for second in the riders’ standings. Couton finished with a flourish, riding multiple winners on the final four race cards. . .Whitaker rode two winners Sunday and is No. 8 all-time with 470 wins at Emerald Downs, and No. 10 all-time with 19 stakes wins. . .Trainer Joe Toye polished off a great season with two more wins and finished second overall in the trainers’ standings with 38 wins. . .10-year-old gelding Trelawny ($6.40) made it three wins at the meet and 20 for his career with a come-from-behind victory under Couton in race five. . .That’s a wrap for 2017, see you in April, 2018!
–##–