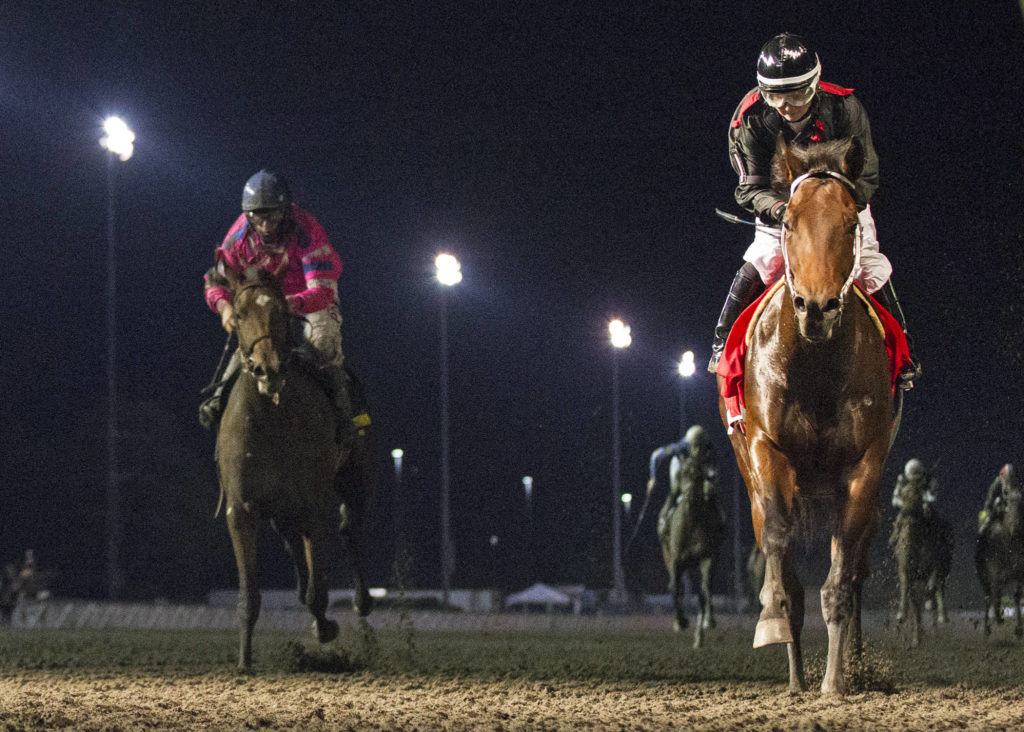 Dutton and Jennifer Whitaker prevail in the Gottstein Futurity

The victory was anything but easy for the flashy speedster. The start of the race was delayed over 10 minutes after Great Gasby got loose at the gate and subsequently was scratched. In the actual race, Coastal Kid was just overtaking Dutton past mid-stretch when suddenly the chestnut gelding and jockey Angel Cruz ducked out sharply, costing them what appeared a certain victory. Dutton was the beneficiary, cruising home under Jennifer Whitaker in 1:43.15 for a mile and a sixteenth and paid $2.60 to win.

The Washington-bred by Noosito improved to three for three and earned $41,250 for Rising Star Stable VIII and trainer Howard Belvoir, pushing the gelding’s earnings to $71,500.

Easy Silence, one of two fillies in the race, rallied to snatch second at 21 to 1, while it was 11 ½ lengths back to Coastal Kid, the 9 to 2 second choice, who re-rallied after the mishap to finish third. Naval Escort, Myuddermamasapaint, Ms Lynn, Whiskey Not Wine, Perfect D and Liberty’s Finale completed the order of finish.

Jeff Metz, trainer of Coastal Kid, said his jockey speculated that the photo finish lights above the finish line might have spooked the horse, who was making only his second career start.

“Alex (Cruz) said when the lights came on, the horse ducked out,” Metz said. “It’s unfortunate to lose a race that way.”

Belvoir said all the horses were affected by the pre-race delay, and that Dutton was wringing with sweat.

“My horse is a little high-strung and the wait didn’t help,” Belvoir said. “It’s too bad for the horse that ducked out, that’s a tough situation, but I’m very proud of Dutton. Jen said he was tired at the quarter-pole but he dug in.”

The Gottstein was the first route test for all nine horses and the big question was if Dutton—coming off sprint victories of 9 and 14 lengths—could carry his speed two turns. Dutton rocketed from the No. 1 post and led by five lengths while setting fractions of :22.48, :45.49 and 1:09.43. Coastal Kid and Easy Silence began closing ground on the last turn, and by the time Dutton straightened into the stretch he was joined by Coastal Kid from the outside. Coastal Kid appeared to be going better than the favorite, but Dutton was showing resilience from the rail when Coastal Kid ducked out sharply.