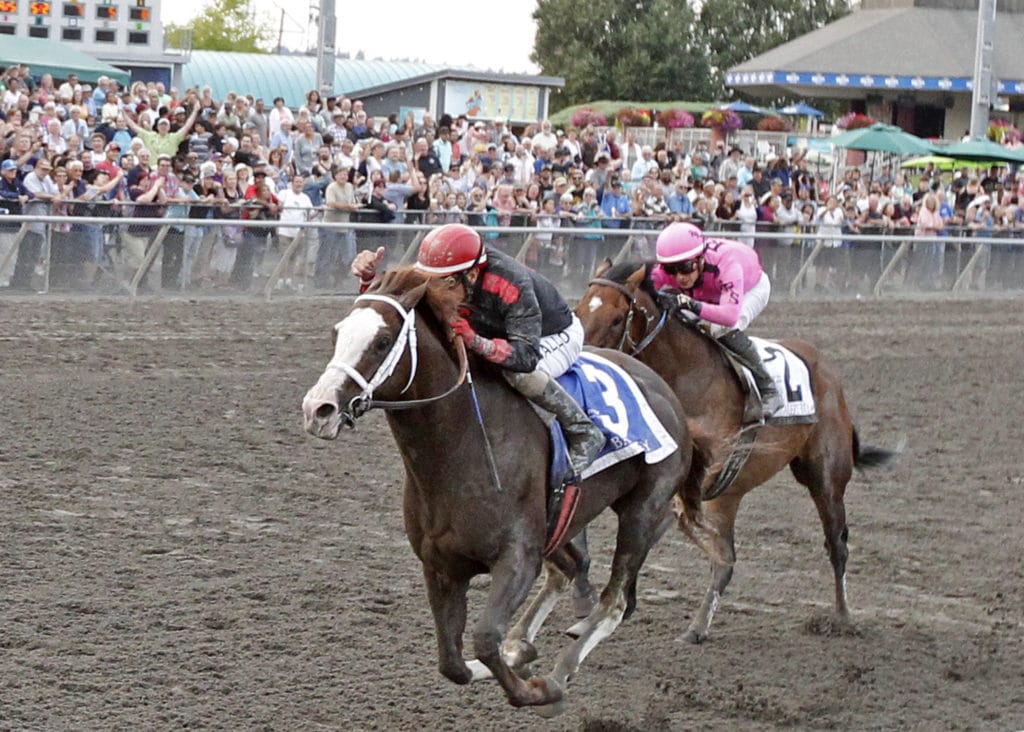 With Javier Matias riding at 120 lbs, Barkley charged between Alert Bay and Oh Marvelous Me to gain command past mid-stretch, and drew clear late for the victory. Second choice in the wagering, Barkley ran the mile in 1:34.93, and paid $7.40, $3.20 and $2.40.

A 5-year-old Kentucky-bred by Munnings-Numero d’Oro, Barkley earned $108,900 for his first graded win and sixth stakes victory overall. His career record improved to 9-4-1 in 17 starts with earnings of $351,800.

For Belvoir, it’s his third win in the Northwest’s premier race, tying him with Jim Penney for most Mile wins at Emerald Downs. Penney, who died last year, is No. 1 all-time with five Mile wins, including two at the old Longacres.

“This is way up there, and I might need a parachute to get down,” he said. “This is a good little horse. He was real slow about switching leads today, but once he did the race was over.”

Barkley represents the first Mile win for Matias, a 46-year-old Mexico City native who ranks among the Top 10 in virtually every major riding category at Emerald Downs, including 31 stakes wins. His previous best Mile finish was a second aboard Winning Machine in 2012. 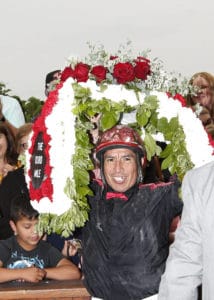 “Whenever you have a short field things can happen,” Matias said in a jubilant winner’s circle. “This time I think I rode a pretty smart race, and the horse proved himself today. He won the race.”

Oh Marvelous Me, ridden by Julien Couton at 117 lbs, held third and paid $3 to show. Owned by Todd and Shawn Hansen of Tenino, Wash., Oh Marvelous Me is now 6-3-3 in 13 starts at Emerald Downs.

Wright, who also trains Oh Marvelous Me, wound up finishing second and third in the Mile despite his current top gun, Riser, missing the race with injury.

Kaabraaj led early, as expected, setting moderate fractions of :23.47, :46.08 and 1:09.98, but was overtaken by Oh Marvelous Me into the stretch. Straightening into the lane, Oh Marvelous Me, Alert Bay and Barkley were three heads apart, and the stage was set for Barkley’s winning move. While Alert Bay drifted out a tad past mid-stretch, Barkley found his best stride and surged to victory.

Barkley joined Washington Hall of Famer Noosa Beach as the only horses in Emerald Downs’ history to win stakes at ages 2, 3, 4 and 5. 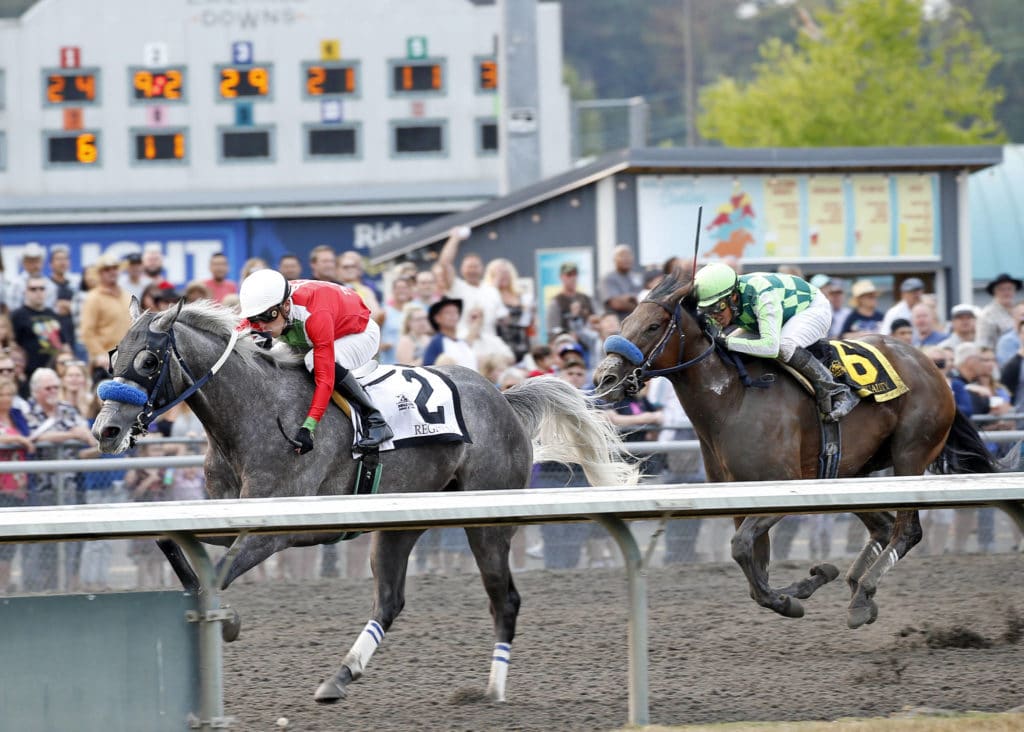 Reginella prevails over Top Quality in the Emerald Distaff

Reginella took command three-eighths from home and held off stable mate Top Quality through the stretch for a 2 ¾-length victory in the $50,000 Emerald Distaff for older fillies and mares.

Top Quality, the 3 to 5 favorite, loomed boldly in mid-stretch but Reginella had energy in reserve for the victory. Ridden by Kevin Orozco at 122 lbs, Top Quality paid $2.20 and $2.10.

No Talking Back, ridden by Anne Sanguinetti, finished third and paid $3.80. A 4-year-old Washington-bred filly, No Talking Back is 2-1-2 in five starts at the meet including stakes placings in the Washington State Legislators, Boeing Stakes and Emerald Distaff.

Daz Lin Dawn finished fourth to give Wright three of the top four finishers in the Distaff, while Little Dancer, Blazinbeauty, Jerre to Carrie and Grace Bay completed the order of finish. 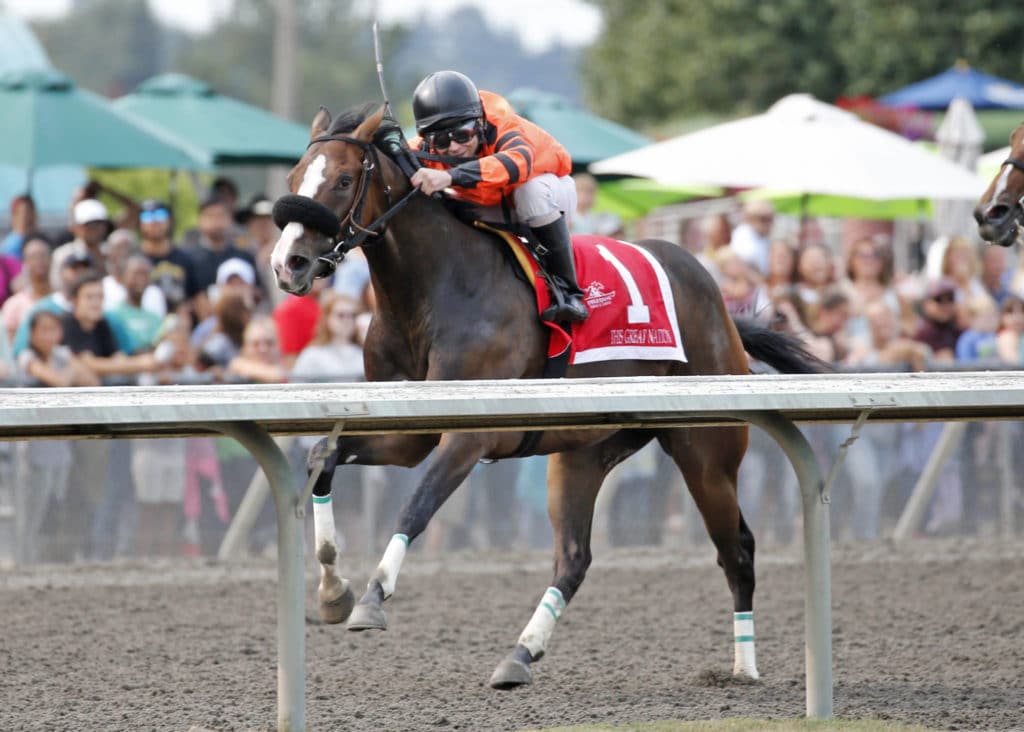 This Great Nation and Erick Lopez

This Great Nation—the longest shot on the board—out finished Jack Van Berg and produced a mammoth upset in the $50,000 WTBOA Lads Stakes for 2-year-old colts and geldings.

A Washington-bred gelding by Nationhood-Great Mom, This Great Nation is trained by Felimon Alvarado for owner Art McFadden of Portland, Ore. The winner—fourth in both previous starts—is now 1 for 3 lifetime with earnings of $27,826. 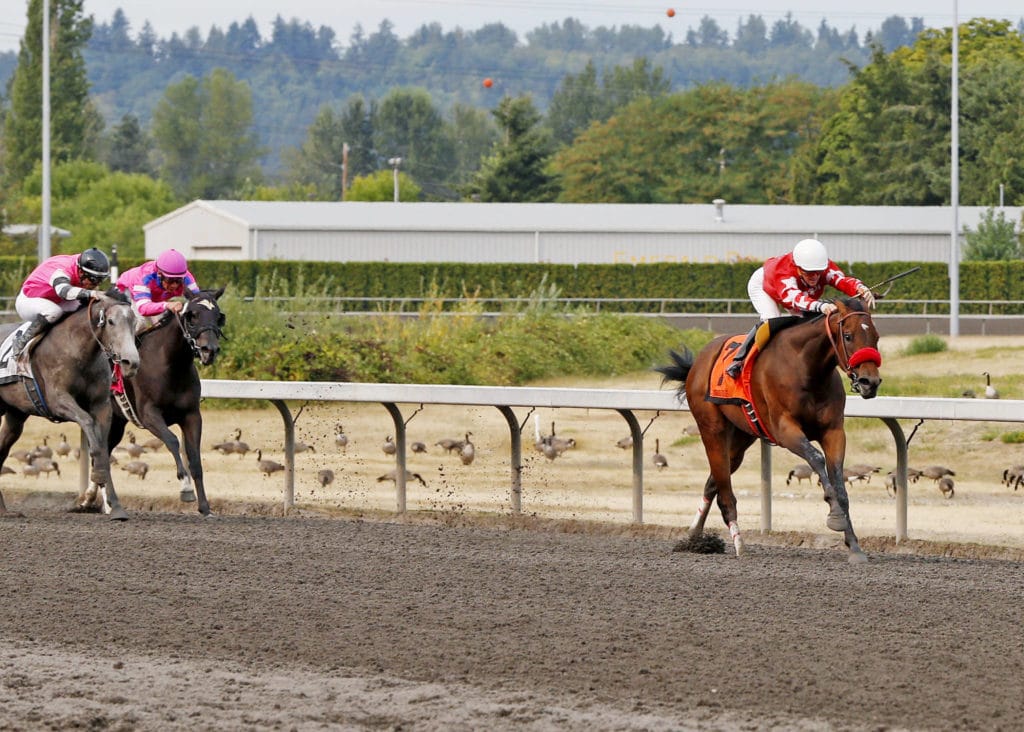 In the $50,000 Barbara Shinpoch Stakes for 2-year-old fillies, Aikman Juliet powered home for a 2 ¾length victory over Twirling Devon in 1:10.47 for six furlongs.

Co-owned by trainer Paul Treasure of Middleton, Idaho and Harry Bettis of Emmett, Idaho, Aikman Juliet improved to 2-1-0 in three starts with earnings of $50,105. Her lone defeat was a close second to Northwest Factor in the Angie C Stakes last month.

Rallying four-wide into the stretch, Aikman Juliet collared the leaders into the lane and drew away for a convincing victory. The winning time was nearly two ticks faster than 2-year-old colts and geldings in Sunday’s WTBOA Lads Stakes

NOTES: The $0.50 All Stakes Pick Four paid $12,081. . .A remarkable streak ended when Chu and I scored an $18.60 upset in Sunday’s fourth race. It was the gelding’s first Emerald Downs’ win since August 27, 2011, a span that included 17 runner-up finishes. . .Sunday’s 10th race, the Mark Kaufman Memorial Purse, was named in honor of the former Publicity Director at Longacres. . .Javier Matias, Erick Lopez and Rocco Bowen rode two winners each on the 11-race card. . .With 49 of 67 racing days in the books, Bowen leads Kevin Orozco 81-53 in the jockeys’ standings. . .Trainers Candi Tollett and Jeff Metz each had two wins Sunday, and Metz leads Blaine Wright 37-30 in the trainers’ standings. . .Live racing resumes Friday with first post 6:30 p.m., and includes a $5,205 carryover in the $0.20 Jackpot Pick 7