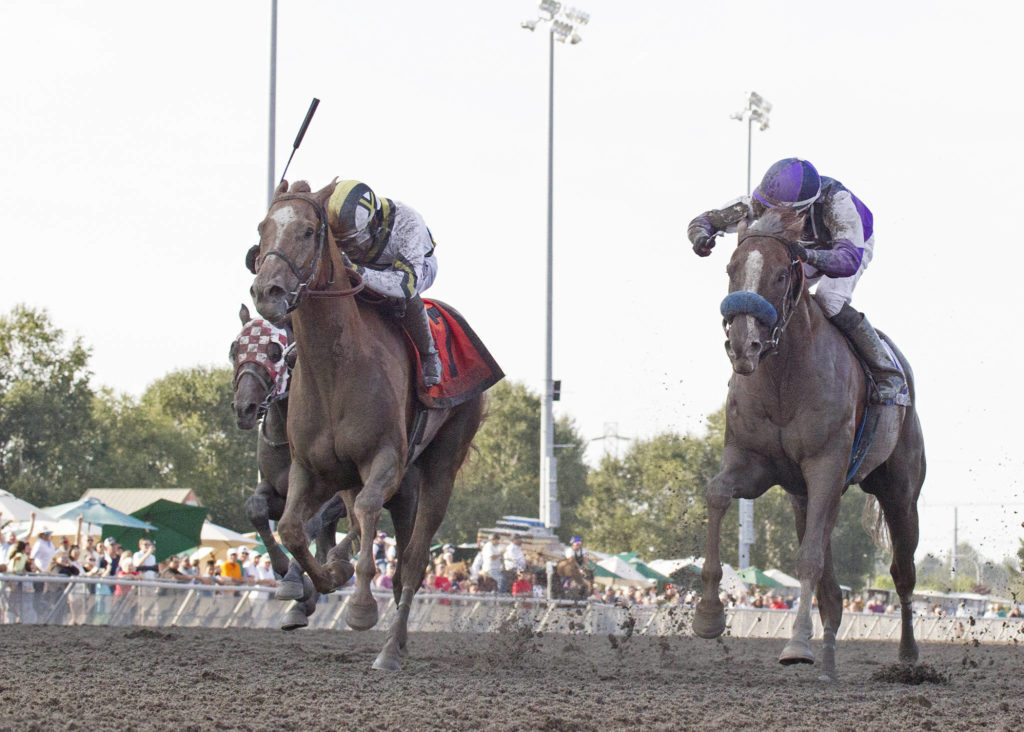 The 4-year-old gelding and three-time Emerald Downs riding champion combined forces for one final surge of energy and nailed Windribbon in the final jump for a head victory in the 86th renewal of the Northwest’s premier horse race.

Background, the betting favorite, ran the mile in 1:36.67 and returned $6.60 for a $2 win ticket. Mike Puhich, winning his second Longacres Mile, is the trainer for owners Bob and Molly Rondeau of Normandy Park. 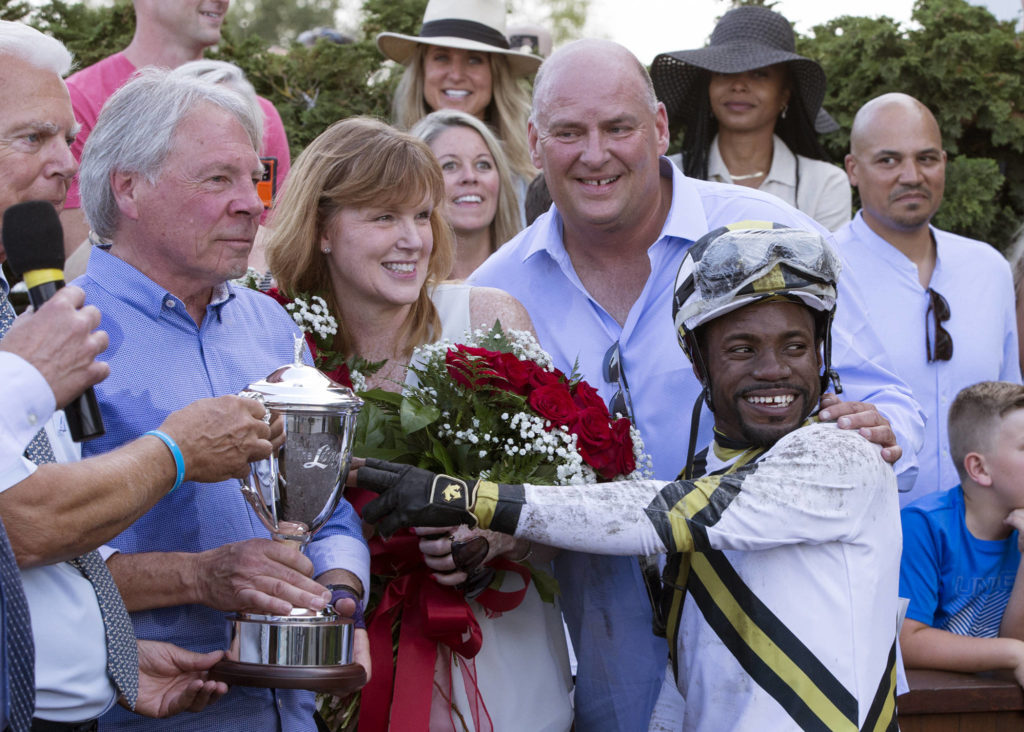 Bob and Molly Rondeau with Rocco Bowen and Mike Puhich in the winner’s circle.

Rondeau, best known as the longtime voice of University of Washington basketball and football, led the cheers in a raucous and emotional winner’s circle ceremony.

“Unbelievable, I have no voice left at all,” Rondeau said. “(In mid-stretch) there’s no way in the world he wins that race, but (Background) had the wherewithal to pull it off. This is an unimaginable thrill.”

Bowen, who won titles here in 2016, ’17 and ’18, resumed his riding career in the Midwest last year after missing some 18 months with injuries. Returning to Emerald Downs to win the track’s biggest race had the 32-year-old native of Barbados in tears.

“I can’t believe it. . .finally,” Bowen said. “I knew Background wasn’t done, we fought together out there.”

A Florida-bred by Khozan, Background earned $55,000 to push his bankroll to $287,532. The chestnut gelding is 4-2-4 from 14 starts overall including three wins at Oaklawn Park in Hot Springs, Ark.

Windribbon, ridden by Kevin Orozco, nearly pulled off a 12 to 1 upset that would have given trainer Blaine Wright a second straight Mile victory. The 5-year-old gelding swept past Papa’s Golden Boy and Anyportinastorm into the lane, opening a 2 ½-length lead past mid-stretch, and just failed to last. Owned by Seamist Racing, Windribbon earned $27,500.

Five Star General, the 5 to 2 morning line favorite ridden by Mario Gutierrez, edged Papa’s Golden Boy in the final jump for third place. The 5-year-old full horse now has a second and a third in the last two Miles.

Papa’s Golden Boy, bidding to sweep all three stakes for older horses at the meet, battled gamely to the wire and finished fourth.

Papa’s Golden Boy, ridden by Julien Couton, and Anyportinastorm, ridden by Juan Gutierrez, dueled through fractions of :22.94, :45.73 and 1:09.73, with neither rider giving an inch. Windribbon, positioned just behind those two, made his move into the lane and appeared headed for the upset victory.

But Background, in sixth place early, made a sustained, grinding rally that finally bore fruit at the finish line.

Unmachable rallied from dead last to pick off fifth place, one length behind Papa’s Golden Boy, while Anyportinastorm faded to sixth. Reelfoot, longest price on the board at 101 to 1, finished seventh while Hard to Deny, Muncey, Forest Fire and Sir Bregovic completed the order of finish.

The Rondeaus enjoyed a big day. In addition to Background winning the Mile, Compelling Smile, co-owned by Rondeau and Mark Dedomenico, finished second in the $50,000 Emerald Distaff. 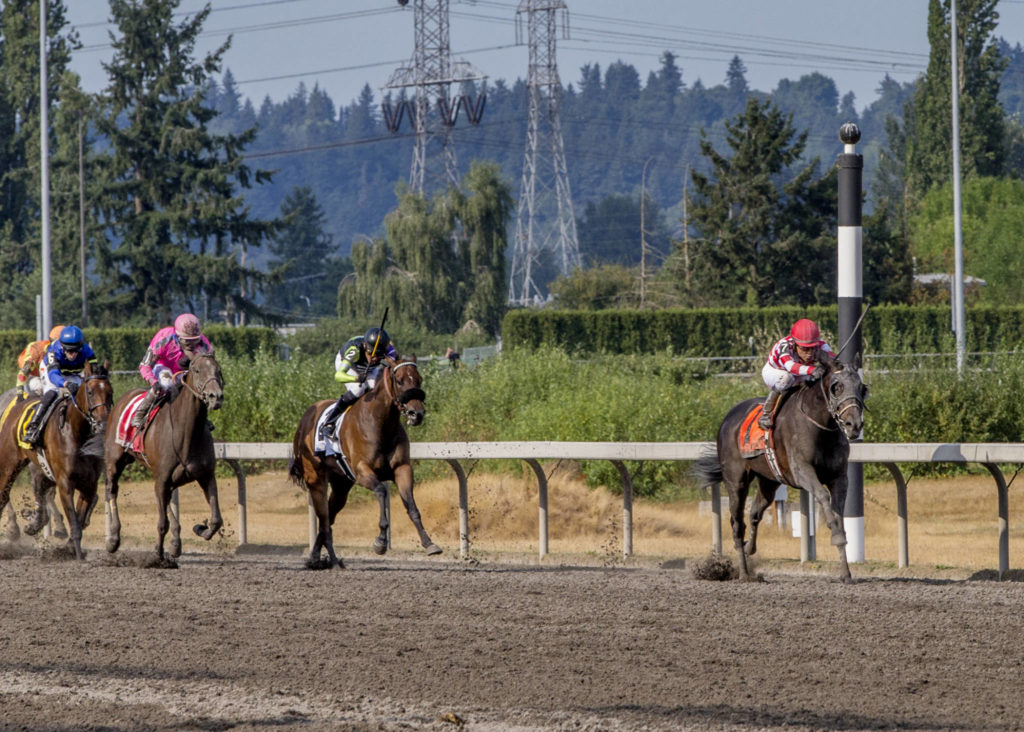 Under a rail-skimming ride by Mario Gutierrez, Princess of Cairo rallied to a four-length victory over Compelling Smile in the $50,000 Emerald Distaff for older fillies and mares.

Carrying 119 lbs., Princess of Cairo ran a mile and one-sixteenth in 1:42.69 and paid $8 as second choice in the wagering. Sandi Gann, saddling her first Emerald Downs stakes winner, is the trainer for owners Mark Dedomenico and North American Thoroughbred Horse Co.

A 4-year-old Kentucky-bred by Cairo Prince, Princess of Cairo is unbeaten in two starts at Emerald Downs with victories in the track’s two signature races for fillies and mares—Emerald Distaff and last year’s Washington Oaks.

In fourth as long shot 27 to 1 Galileta led through six furlongs in 1:11.74, Princess of Cairo waited for racing room inside, finally darting through as daylight beckoned into the stretch.

“I was just waiting and waiting for my opening, and when the rail opened, we went for it,” Gutierrez said.

“I love that filly, she’s got so much talent,” Gann said. “She doesn’t always show up with it,” but she did today.”

Princess of Cairo has raced mainly in Vancouver and Phoenix and has an overall mark of 5-0-3 in 12 starts with earnings of $89,674.

Compelling Smile, third choice in the wagering, rallied under Rocco Bowen to finish second. A 4-year-old Kentucky-bred by Constitution, Compelling Smile is co-owned by Dedomenico and Bob and Molly Rondeau.

Galileta tried to steal the race under Kevin Orozco, leading from the bell to mid-stretch, finally yielding to Princess of Cairo and Compelling Smile in the final furlong. Galileta returned $14.60 to show.

Rounding out the order of finisher were Getting Sideways, Killarney Lass, Daffodil Sweet, Squan’s Kingdom and Ms Lynn.

Daffodil Sweet, the 3 to 2 betting favorite, pressed the pace to upper stretch and gave way through the lane.

NOTES: Mutuel handle totaled a season-high $2,452,949 on the 10-race card. . .Stryker Phd won an on-line poll to select the best horse in the track’s 25-year history, defeating second place Noosa Beach for the honor. . .Oregon-bred Stay in Grace ($5) scored her 12th career victory in dramatic fashion, nipping Please Me in the final strides of a $20,000 claimer for older fillies and mares at 6 ½ furlongs. . .Rocco Bowen rode three winners in his return to Emerald Downs. . .Alex Cruz rode two winners—his 19th multiple-win day this season—and leads Julien Couton 58-53 atop the standings. . .Frank Lucarelli led the trainers with two wins and is four away from the top sot in the standings. With 16 days remaining, Joe Toye leads Lucarelli 21-17 with Ari Herbertson third with 15. . .The $0.20 Jackpot Pick Six pool is $12,530. . .Live racing resumes Thursday with first post 6 p.m.
–##–