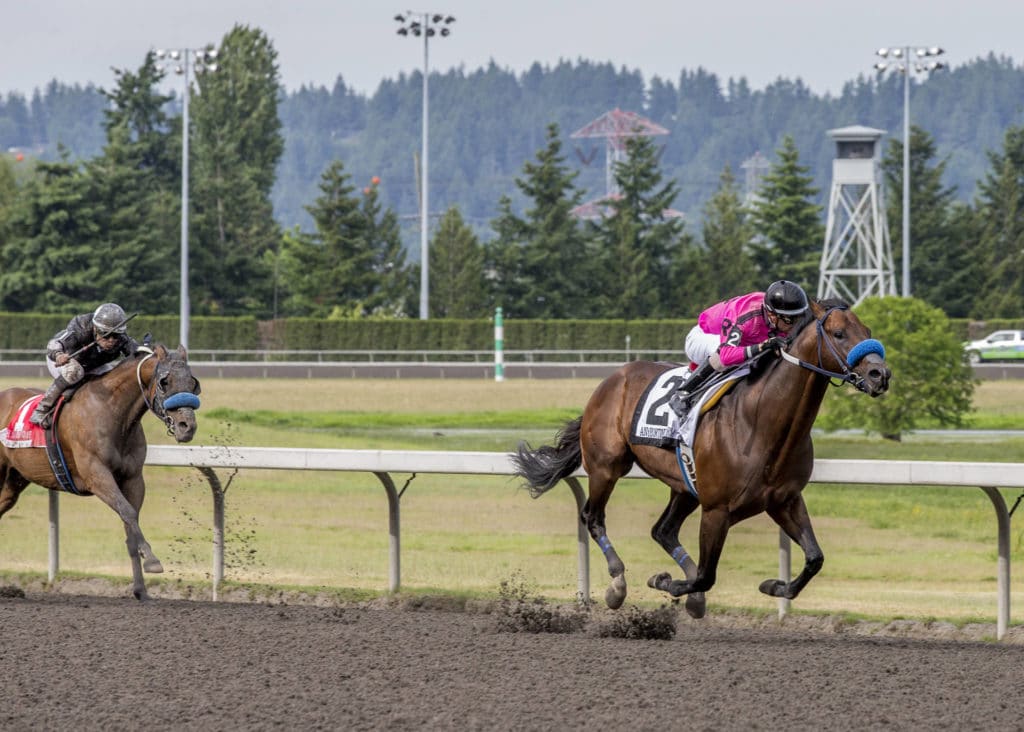 AUBURN, Wash. (June 2, 2019) – Anyportinastorm delivered a scintillating Northwest debut Sunday, romping home by 3 ½ lengths over stable mate Oh Marvelous Me in the $50,000 Governor’s Stakes for 3-year-olds and up.

Breaking from the No. 2 post-position, Anyportinastorm set fractions of :21.55 and :43.74for the quarter and half-mile, shook off Cody’s Choice on the turn, kicked 2 ½ lengths clear into the lane, and proved much the best.

“He broke like he wanted to run today,” Hernandez said in the winner’s circle. “I asked him at the quarter-pole, and he responded. He’s a really nice horse.”

Hernandez is now 6 for 11 lifetime at Emerald Downs with five stakes wins.

Wright, meanwhile, has won three of the first four stakes of the meet and is up to No. 7 all-time with 34 stakes wins at Emerald Downs. He also has two straight Governor’s wins—Chappell Alpine Farms’ Riser won the 2018 Governor’s by 4 ¼ lengths under Hernandez in 1:08.23.

Oh Marvelous Me, ridden by Jorge Carreno at 120 lbs, rallied strongly inside and edged Grinder Sparksaglo for second and paid $5.40 and $3. Owned by Todd and Shawn Hansen and also trained by Wright, Oh Marvelous Me is 6-4-5 in 16 career starts at Emerald Downs.

Grinder Sparksaglo, ridden by Juan Gutierrez at 119 lbs, finished a head behind Oh Marvelous Me and paid $8 to show.

Sippin Fire, second choice at 9/2 odds, moved into contention while five wide on the turn, but failed to sustain his bid in the stretch and finished fourth. Hit the Beach, Tumac Mountain and Cody’s Choice completed the order of finish.

The $50,000 Budweiser Stakes at 6 ½ furlongs is next for older horses on June 30. Wright said Anyportinastorm is likely for the Budweiser, but would skip the $50,000 Mt. Rainier Stakes at 1 1/16 miles on July 21, and then trained into the Longacres Mile. 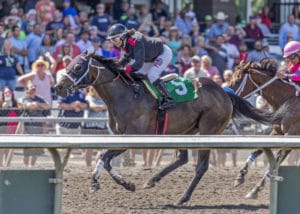 NOTES: So Lucky ($20.40) held off Mike Man’s Gold to capture Sunday’s third race under Jennifer Whitaker in 1:08.73 for six furlongs. It was the first win in 11 tries for Washington’s Champion 2-Year-Old of 2016, co-owned by Rising Star Stable and Pegasus Too. . .Bidding for a record-tying 21st victory at Emerald Downs, 9-year-old Mike Man’s Gold was reclaimed by Greg Conley, Chuck Conley and Terra Firma Farm for $25,000. . .Whitaker was two for two Sunday riding for trainer Howard Belvoir, scoring back to back victories on So Lucky and Sleet Afleet ($9.40). . .Rising Star Stable owns Sleet Afleet and is co-owner of So Lucky. . .Vince Gibson also had two training wins Sunday. . .Pas de Panique, a 2-year-old Washington-bred colt by Smiling Tiger-Carrabelle Harbor, debuted with a second in a $65,000 maiden special weight at Santa Anita. . .Calex ($11) made it two for two at the meet and 17th career victories with a gate to wire score for Lorenzo Lopez and owner/trainer Valentin Picho Garcia. . .Live racing resumes Friday with first post 6:30 p.m.
–##–