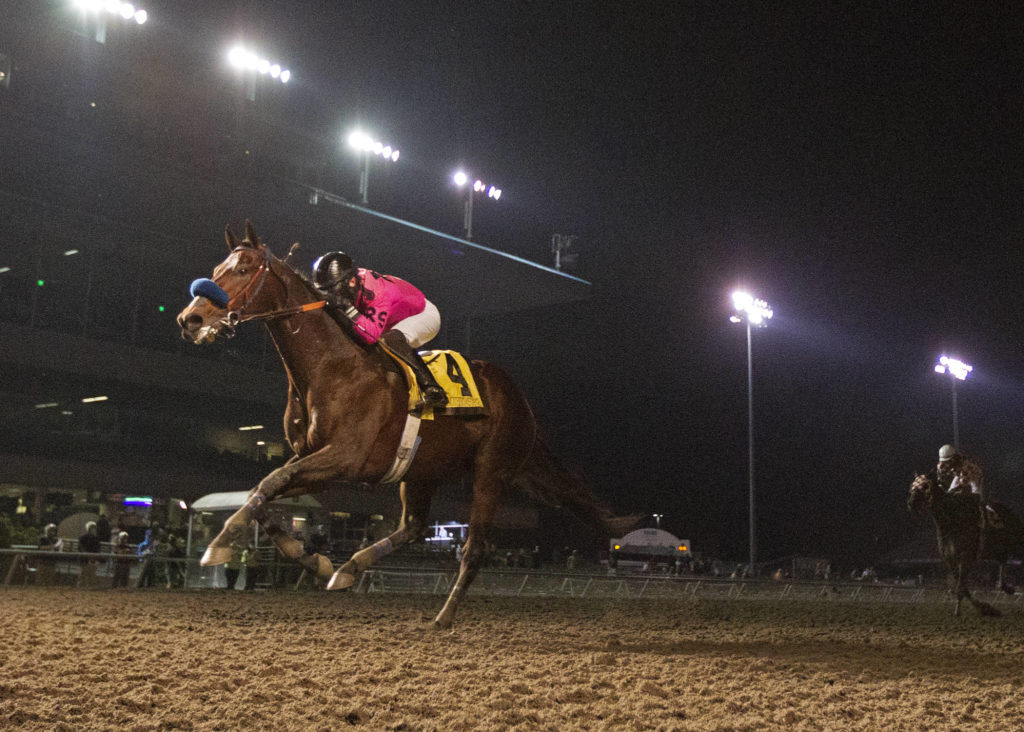 AUBURN, Wash. (Sept. 10, 2020) – Anothertwistafate made a triumphant return to action Thursday evening at Emerald Downs, returning from a 16-month layoff and powering to a 4½-length victory over Five Star General in the 85th running of the $100,000 Longacres Mile (G3).

It is the first Mile victory for Wright and Redekop—runner-up the last two years with Alert Bay and Anyportinastorm—and third Mile victory for Gutierrez, who swept both stakes Thursday and is just 13 wins from tying Gallyn Mitchell’s all-time track record of 1,419 wins.

Stalking early fractions of :22.71, :45.21 and 1:08.74 set by Papa’s Golden Boy, Anothertwistafate took command three deep into the stretch and drew off to win with total authority. It was the colt’s first start since a 10th in the 2019 Preakness and capped a superb training job by Wright, 46, who brought Anothertwistafate into the race off a series of works at Golden Gate Fields.

“The first thing is to congratulate Mr. Peter Redekop and my entire crew here and at Golden Gate,” Wright said. “A Lot of people have asked me if this is the best horse I’ve trained, and he’s been hot and cold with some health issues, but he’s a very nice horse.”

Wright also praised Gutierrez who previously won the Mile on No Giveaway in 2005 and The Great Face in 2007.

“The race worked out just the way we scripted it this morning, Juan (Gutierrez) did a great job.” Wright said. “When we couldn’t bring our rider (to Emerald Downs) there was no hesitation to ride Juan. He rode his 2,000th winner this year and is a great speed rider on this track. He fit this horse perfectly.”

A Kentucky-bred by Scat Daddy, Anothertwistafate earned $55,000 to push his career bankroll to $358,505. His overall mark is 4-2-0 in eight starts, including a victory in the El Camino Real Derby and seconds last year in the Sunland Derby and Keeneland’s Lexington Stakes.

Canadian shipper Five Star General, ridden by two-time Kentucky Derby winning jockey Mario Gutierrez at 122 lbs, finished a clear second and paid $3.20 and $2.60 as second choice in the wagering. The runner-up is owned and trained by Glen Todd, giving Vancouver owners the top two finishers in the 2020 Mile.

The Press, a 46 to 1 long shot ridden by Jennifer Whitaker at 114 lbs, rallied for third and paid $4.60 to show. Whitaker won the 2008 Mile on Wasserman and remains the only woman rider ever to win the race.

Eddie Martinez, rider of Elliott Bay, claimed foul against The Press, alleging interference into the backstretch, but the stewards made no change in the order of finish.

He’s the Reason, 5 to 1 third choice on the morning line and stablemate of Five Star General, was scratched earlier in the day.

NOTES: Total mutual handle on the 11-race card was $2,265,151. . .Gutierrez rode four winners and is No. 2 all-time in Emerald Downs’ wins with 1,416 No. 3 in stakes wins with 67. . .Emily’s Gold ($12) won the 25th running of the Mark Kaufman Memorial Purse named in honor of the longtime Longacres publicity director who passed away in 1995. . .Owner Lynn Hebdon posted a one-two finish with Dyf ($6.60) and Seattle Smoke in the third race. . .Washington-bred Bodenheimer is 6 to 1 in Saturday’s $500,000 Kentucky Downs Juvenile Turf Sprint at Kentucky Downs in Franklin, KY. Bodenheimer (Atta Boy Roy-Beautiful Daniele) is two for two including a stakes victory last month at Prairie Meadows. . .Live racing resumes Wednesday, September 16, with first post 2:15 p.m.
–##–