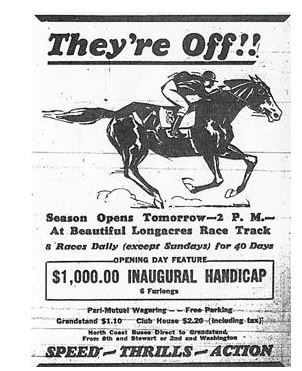 Longacres closed in 1992 after 59 seasons, and racing in Western Washington resumed in 1996 when Ron Crockett and a group of investors opened Emerald Downs.

Newspapers on August 3, 1933 were celebrating air service from New York to Seattle in less than 20 hours, a 5-Tube Radio at The Bon Marche was $27.50, sunburn lotion from Bartell Drugs was just $0.39 cents, and an ad proclaiming “They’re Off at Beautiful Longacres” appeared in the sports section. There were 40 days of racing in the first season which concluded on Sunday, September 17.

Track President Phil Ziegler notes how much similarity there is at Emerald Downs to Longacres, “The track’s opening season ads promised Speed, Thrills and Action plus the great view of Mt. Rainier. All things you can still experience at Emerald Downs 85 years later! In many ways the vision that Joe Gottstein had for racing is still alive and well”

Emerald Downs is currently in their 23rd season which runs through Sunday, September 23rd. More information available at www.emeralddowns.com.