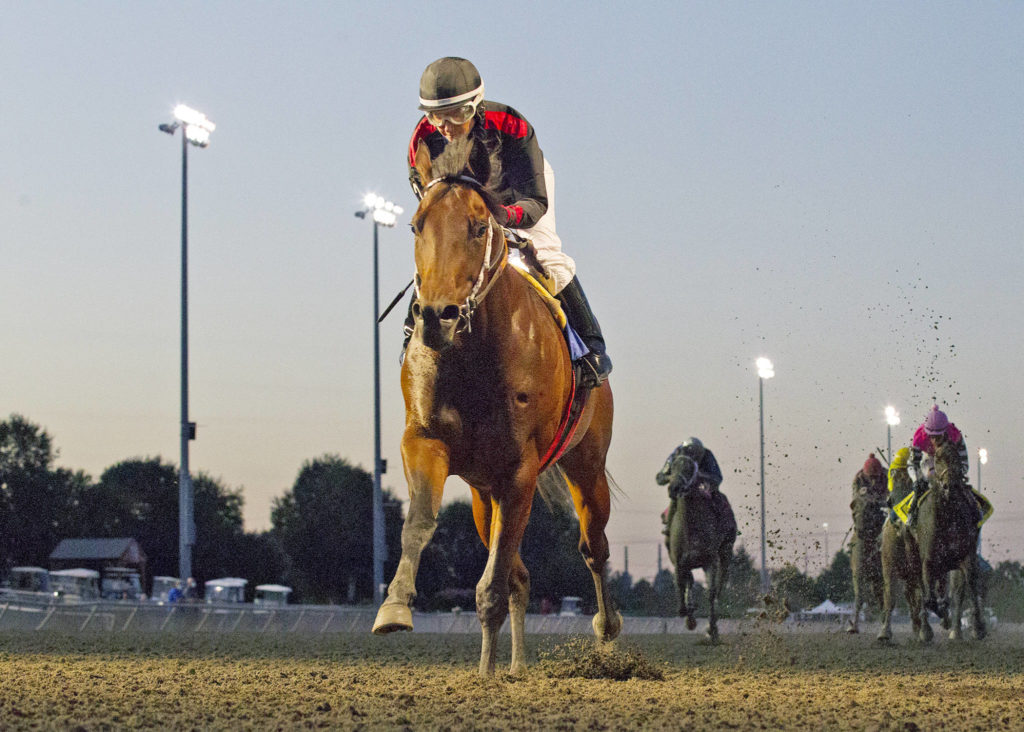 Trained by Howard Belvoir and ridden by Jennifer Whitaker, Dutton notched victories in the Gottstein Futurity and WTBOA Lads Stakes and finishied the campaign 3 for 3 with a meet-leading $71,500 for Rising Star Stable VIII.

A Washington-bred by Noosito, Dutton debuted Aug. 27 with an overwhelming 9-length victory in the WTBOA Lads at 6 ½ furlongs, followed by a 14-length triumph against allowance foes at 6 furlongs. In the Gottstein, Dutton was racing head and head with Coastal Kid when the latter ducked out sharply, allowing Dutton to cruise home by 2 ¼ lengths in 1:43.15 for a mile and one-sixteenth.

Alittlelesstalk and Unmachable also received votes for Horse of the Meeting and Top Washington-Bred. In fact, all three finished with two stakes wins and an allowance victory on their resumes.

Alittlelesstalk (4-3-1-0-$63,550) won races short and long, dominating the Emerald Distaff and prevailing in the Washington Cup Filly and Mare Stakes along with an early-season allowance dash. A daughter of 2004 Washington Horse of the Year Demon Warlock trained by Roddina Barrett, Alittlelesstalk was unanimously voted Top Older Filly or Mare. In 2019 she was voted Top 3-Year-Old Filly, and her overall Emerald Downs’ record s 7-4-0 in 14 starts for owners Tim Floyd, Kelly Dougan and Barrett.

Unmachable (5-3-1-1-$65,225) also was versatile, winning the Seattle Slew Stakes at 6 ½ furlongs and Muckleshoot Tribal Classic vs. older horses at a mile and one-sixteenth. Trained by Jack McCartney for owner Tawnja Elison, the son of Macho Uno was voted Top 3-Year-Old Male.

Daffodil Sweet, trained by Chris Stenslie and owned by Jody Peetz and Steve Shimizu, scored three victories including a score in the Coca-Cola Stakes and was voted Top 3-Year-Old Filly.

Omache Kid, the only horse to win four races, was voted Top Claimer.

Lucarelli won his second straight training title and seventh overall while Christensen, his main client, repeated as the track’s leading owner. Lucarelli saddled 42 winners in 38 days while Christensen, who raced horses in partnership with McKee, topped the owners’ standings with 24 wins.

The Longacres Mile, in which the Blaine Wright-trained Anothertwistafate returned from a 16-month layoff to dominate by 4 ¼-lengths, was voted Race of the Meeting.

Nick Lowe was the leading Quarter Horse trainer for a second consecutive season and swept all three stakes Aug. 20.

Trainers Jorge Rosales and Sharon Ross received the Martin Durkan Award for leadership, cooperation and sportsmanship, while Cerapio Figueroa was voted the Lindy Award by his fellow riders for accomplishment and sportsmanship throughout the meeting.

Other awards included Stephanie Fiorito being named 2020 Exercise Rider of the Year and Taylor Brady being chosen as Jockeys Valet of the Year.

Harbor the Gold was the leading stallion for the seventh straight year and ninth in the last 10, and surpassed Slewdledo as Emerald Downs’ all-time leading sire.