Sippin Fire (No. 6) edges Weekend Wizard in the Muckleshoot Derby

A Washington-bred gelding by Harbor the Gold-Bahati, Sippin Fire earned $26,400 to boost his career mark to $129,088. His overall record is 5-1-0 in eight starts including consecutive wins in the Coca-Cola Stakes, Seattle Slew Stakes and Muckleshoot Derby.

Sunday’s victory, however, was far more difficult than his romps in the Coca-Cola and Seattle Slew. Weekend Wizard was the real deal, shaking off a pesky 60-1 Freiburg on the last turn before bravely battling Sippin Fire nearly the length of the stretch.

“That was two nice horses duking it out down the lane,” Bowen said. “Sippin Fire won it, he’s a great horse, and it’s off to Canada.”

Bullock said the hot weather was worrisome, but his chestnut gelding delivered a sensational effort.

“The champ got awful hot today, and I was concerned,” Bullock said. “But he’s a good horse, and he got the job done against a pretty tough horse.”

Weekend Wizard, ridden by Julien Couton at 122 lbs, nearly bagged his third stakes win of 2018. A double stakes winner this year in Vancouver, the son of Rosberg would have the home track advantage should he meet Sippin Fire again in the BC Derby in six weeks,

It was 9 ¾ lengths back to third place finisher Elliott Bay, ridden by Jennifer Whitaker at 122 lbs, and a $3 show payoff. Argosy Fleet, the other Hastings shipper, finished fourth, followed by Schoenhardt, Check and Raise, Smoothee Lee, Take Charge Deputy and Freiburg. 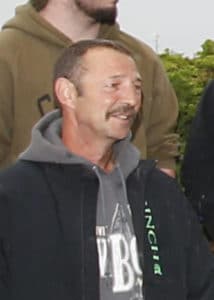 NOTES: Bowen rode four winners Sunday, extending his lead to 74-50 over Kevin Orozco atop the jockeys’ standings. Bowen also tops the stakes standings with five stakes wins and is now tied with Javier Matias for No. 5 all-time with 30 stakes wins. . . Bullock’s new nickname might be Big Bucks Bullock; four of his five wins this season are stakes—three by Sippin Fire and one by Northwest Factor. . .Sippin Fire’s winning time was over two seconds faster than Princessof the Nyl’s 1:51.24 in the Washington Oaks last week. . .Sippin Fire is one of two 3-year-old nominated to the $200,000 Longacres Mile (G3) on Sunday, Aug. 12. . .Jupiter S. ($12.60) prevailed in race eight and Frank Lucarelli moved ahead of Tim McCanna, 931-930, for No. 1 in all-time training wins at Emerald Downs. . .Oh Marvelous Me ($3.20) edged Strate Remark in the $21,000 sub-feature for 3-year-olds and up, running one mile in 1:35.11. A 6-year-old Bluegrass Cat gelding, Oh Marvelous Me is 6-3-2 in 12 starts at Emerald Downs for trainer Blaine Wright and owners Todd and Shawn Hansen. . .Jockey Anne Sanguinetti connected with Cowglitz Callie for a $48.80 upset in the ninth race finale—Sanguinetti’s seventh win this season at odds of 13-1 or higher. . . Heza Dasha Fire—the richest racehorse in Washington history—scored a three-quarter-length victory in Saturday’s $100,000 Spencer L Childers California Breeders’ Challenge at Los Alamitos in Cypress, CA. A 6-year-old Washington-bred Quarter Horse by Walk Thru Fire-Dasha Freda, Heza Dasha Fire is 16-5-0 in 22 career starts with earnings of $2,217,987 for owners Don and Kathy Meneely of Kennewick, WA. . .Live racing resumes Friday with first post 6:30 p.m. The 7-race card marks the 85th anniversary of the opening of Longacres on August 3, 1933.