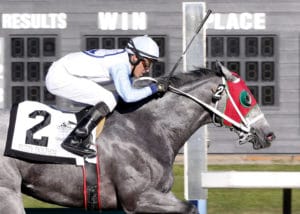 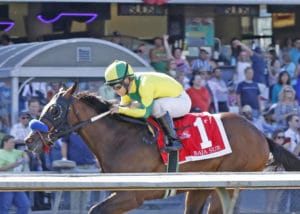 The Auburn drew 12 nominations, led by Emerald Downs and Washington champion 2-year-old Baja Sur, a Smiling Tiger gelding that dominated foes by a combined 15 ¾ in two 2018 victories. Baja Sur (right) raced to a 10 ½-length victory in the King County Express, running 5 ½ furlongs in 1:03.13 and earning a 70 Beyer.

Stakes winners Fuzzy Dolphin (left) and Dr John H, both sons of Harbor the Gold, also are nominated to the Auburn. Fuzzy Dolphin had a strong 2-year-old campaign that featured a gate to wire victory in the Washington Cup Juvenile Colts and Geldings and a third in the Gottstein Futurity. Dr John H, a full brother to 2017 Emerald Downs’ Horse of the Meeting Mach One Rules, already has stakes wins at Turf Paradise and Hastings Racecourse.

This Great Nation delivered a 48 to 1 upset in the 2018 WTBOA Lads Stakes, while Todo Es Toros defeated Arizona-breds in the Gene Fleming Breeders’ Derby at Turf Paradise. Lansky and My Grandpa are both maiden special weight winners at Emerald Downs, and Frolic and Detour was unleashing a strong rally before clipping heels and losing the rider in the 2018 Gottstein Futurity.

Nominations include eight Washington-breds, one Kentucky-bred, one New York-bred, one Arizona-bred, and one Virginia-bred.