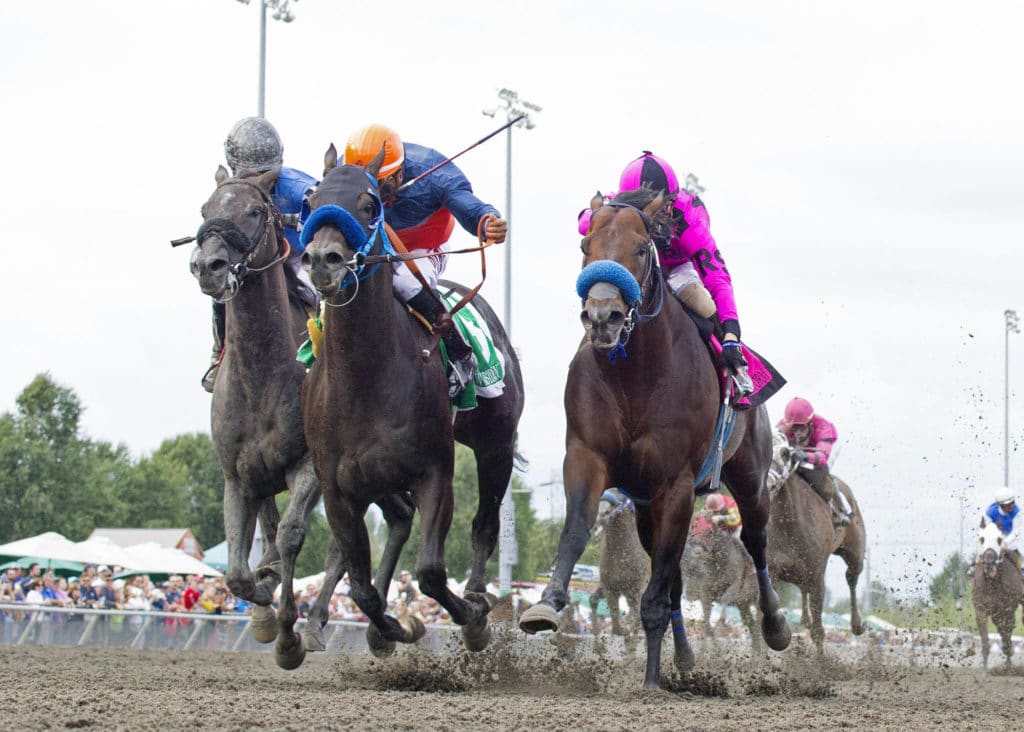 AUBURN, Wash. (September 22, 2019) – Anyportinastorm, No Talking Back, Frank Lucarelli and Gary Wales all took down multiple awards Sunday as the curtain closed on the 24th season of live racing at Emerald Downs.

Peter Redekop’s Anyportinastorm, a 5-year-old Florida-bred that ran meet-fastest time at 6 and 6 ½ furlongs while winning the Governor’s Stakes and Budweiser Stakes, was voted Top Older Horse and Top Sprinter. One Horse Will Do Corporation and Steve Shimizu’s 5-year-old mare No Talking Back—the only three-time stakes winner at the meet—was honored as Top Older Filly or Mare and Top Washington-bred.

On the human side, Frank Lucarelli shattered the single-season record with 81 wins and rolled to his his sixth training title. The 62-year-old conditioner–whose season highlights also included a record-tying five-win day and becoming the first trainer in track history to win 1,000 races–also received honors for Top Training Achievement.

Wales rode 99 winners and scored a runaway victory in the jockeys’ standings, and was voted Top Riding Achievement for his season-long dominance atop the standings.

John and Janene Maryanskis and Riverbend Farms’ Baja Sur rolled to dominant victories in the Auburn Stakes and Coca-Cola Stakes to earn honors as Top 3-Year-Old Colt or Gelding. A Washington-bred by Smiling Tiger, Baja Sur also was Top 2-Year-Old Juvenile Colt or Gelding in 2018.

Alittlelesstalk, owned by Warlock Stables, Kelly Dougan and Stephanie Loffredo, was Top 3-Year_old Filly. A Washington-bred by Demon Warlock, Alittlelesstalk prevailed in the Kent Stakes and Washington Cup Sophomore Filly, and also finished second vs. colts in the Muckleshoot Derby.

Race Home went from unraced to Top 2-Year-Old Colt or Gelding in two weeks. A son of Race Day owned by Tim Bankers, Race Home exploded through the lane to capture the $100,000 Gottsetin Futurity and finish the season 2 for 2. Windy Point, owned by Clemans View Racing and Michelle Beaunaux, was stakes placed three times including a victory in the Washington Cup Juvenile Filly, and was voted Top 2-Year-Old Filly.

The 84th renewal of the $200,000 Longacres Mile (G3), featuring a driving three-way finish between Law Abidin Citizen, Anyportinastorm and Restrainedvengence, was voted Race of the Meeting. And Brahms Forest, who began the season with a victory in a $4,000 claiming race, posted a 5-2-0 record in eight starts and was voted Top Claimer. Trained by Lucarelli, the 5-year-old Forest Command gelding is owned by Two Putts for the Win #4, David Lechmanik and Alliance Stable.

To be eligible for a year-end award, a horse must have raced at least twice at the 2019 season.

The 2019 Horse of the Meeting will be announced Wednesday.