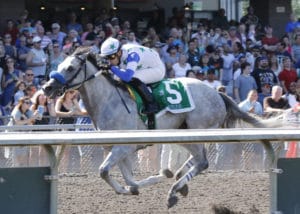 The extremely quick Riser (right) has crossed the wire first in all three older horse stakes this season, leading gate-to-wire in the six-furlong Governor’s Stakes, 6 ½-furlong Budweiser Stakes (DQ’d and placed fifth) and 1 1/16-mile Mt. Rainier Stakes, winning the latter by 2 ¼ lengths in a stakes record 1:40.08 with a career-high 97 Beyer. A 4-year-old Mizzen Mast colt, Riser is 5-1-0 in seven Emerald Downs’ starts with earnings of $145,174.

Wright also nominated Alert Bay, winner of 10 stakes and over $1.2 million in a 33-race career that includes a third and a fourth in the 2015 and 2016 Longacres Miles. The 7-year-old City Zip gelding has been off nearly 13 months; his last start was a third in the 2017 American Handicap on turf at Santa Anita.

Gold Rush Dancer (left), 4 ¾-length winner of the 2017 Mile, bids to become the fifth two-time Mile winner and only the second at Emerald Downs (Stryker Phd 2014-15). The 5-year-old Private Gold horse has been flat this year, however, finishing 10th, 9th and 10th in three turf stakes at Santa Anita and Del Mar.

Long-time rivals Mach One Rules and Barkley, second and fourth to Gold Rush Dancer last year, return for another crack at the track’s biggest race. Barkley has seconds this year in the Governor’s Stakes and Mt. Rainier Stakes while Mach One Rules has finished third to Riser in all three stakes in 2018.

My Friend Emma has blossomed in 2018 for trainer Rhoda March, earning 98 and 94 Beyers while finishing runner-up in the one-mile All American on synthetic at Golden Gate and winning the five-furlong Albany on turf at Golden Gate.

Conquest Windycity has raced mainly in Kentucky, New York and Florida, earning a 100 Beyer in a seven-furlong allowance last winter at Gulfstream Park.

Kaabraaj, unproven at a mile, is one of the fastest sprinters in track history, setting a track and state record of 1:06.90 for six furlongs in 2016 and posting the meet’s fastest 6-½ furlongs, 1:14.31, in a gate-to-wire victory earlier this month.

Oh Marvelous Me, another Wright trainee, is a consistent 6-year-old with a 6-3-2 record in 12 career starts at Emerald Downs, while Shivermetimbers and multiple Emerald Downs’ stakes winner Sippin Fire are the only 3-year-olds nominated to the Mile.

Handicap weights for the Mile will be announced Saturday, August 4, with entries drawn Wednesday, August 8.