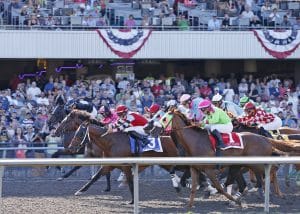 The 81st running of the Grade 3 Mile is the Northwest’s premier Thoroughbred race and caps a stakes double-header also featuring the $65,000 Emerald Distaff for older fillies and mares.

Budding star O B Harbor heads a local contingent that includes two-time defending Longacres Mile champion Stryker Phd, whose bid to become the first three-time Mile winner has been knocked off course with a third place finish in the Budweiser Stakes and a fourth in the Mt. Rainier Stakes.

A 4-year-old Oregon-bred, O B Harbor has been brilliant in 2016, reeling off four straight victories including triumphs in the Governor’s Stakes, Budweiser Stakes and Mt. Rainier Stakes. Trained by Chris Stenslie for One Horse Will do Corporation, O B Harbor has run meet fastest times at 5 ½ furlongs, 6 ½ furlongs, one mile and 1 1/16 miles. He fits the profile of recent Mile winners, who dominated local runners before handling all comers in The Mile.

Sammy Mandeville is winless in six starts this year but showed a fondness for Emerald Downs with a determined rally in the 2015 Mile, rallying from 18 lengths back to finish runner-up to Stryker Phd. His trainer, Doug O’Neill, saddled Sky Jack to a state record 1:33 clocking in the 2003 Longacres Mile.

Hall of Fame trainer Jerry Hollendorfer nominated Cyrus Alexander, Point Piper and Chief of Staff to The Mile. A $1.7 million son of Medaglia d’Oro, Cyrus Alexander seems a perfect fit for the race, compiling a 2-2-1 record in six starts at one mile, and scored by 2 ¼ lengths in the 1 1/16-mile Lone Star Park Handicap (G3) in May. Point Piper has been locking horns with toughies, most recently finishing third and fourth in the Oaklawn Handicap (G2) and The Californian (G2).

Southern California trainer Peter Miller nominated Calculator and El Huerfano. A 4-year-old by In Summation, Calculator was runner-up to American Pharoah in the 2015 Front Runner (G1) and finished second this year in the Carter Handicap (G1) and Churchill Downs Handicap (G2), both at seven furlongs.

Barkley, the lone 3-year-old nominated, has enjoyed a sensational sophomore season for Howard Belvoir and Rising Star Stable III, compiling three stakes wins before dropping a head decision to Opportunistic in the $75,000 Emerald Downs Derby. Collaborator in 1958 is the last 3-year-old to win the Longacres Mile.

Multiple-graded winner Dortmund, second to California Chrome in last week’s San Diego Handicap, was nominated by trainer Bob Baffert, but is expected to remain at Del Mar for the $1 million TVG Pacific Classic (G1) on August 20.

Handicap weights for the Longacres Mile will be announced Saturday, August 6, with entries drawn Wednesday, August 10. High weights preferred if more than 12 horses enter the race.