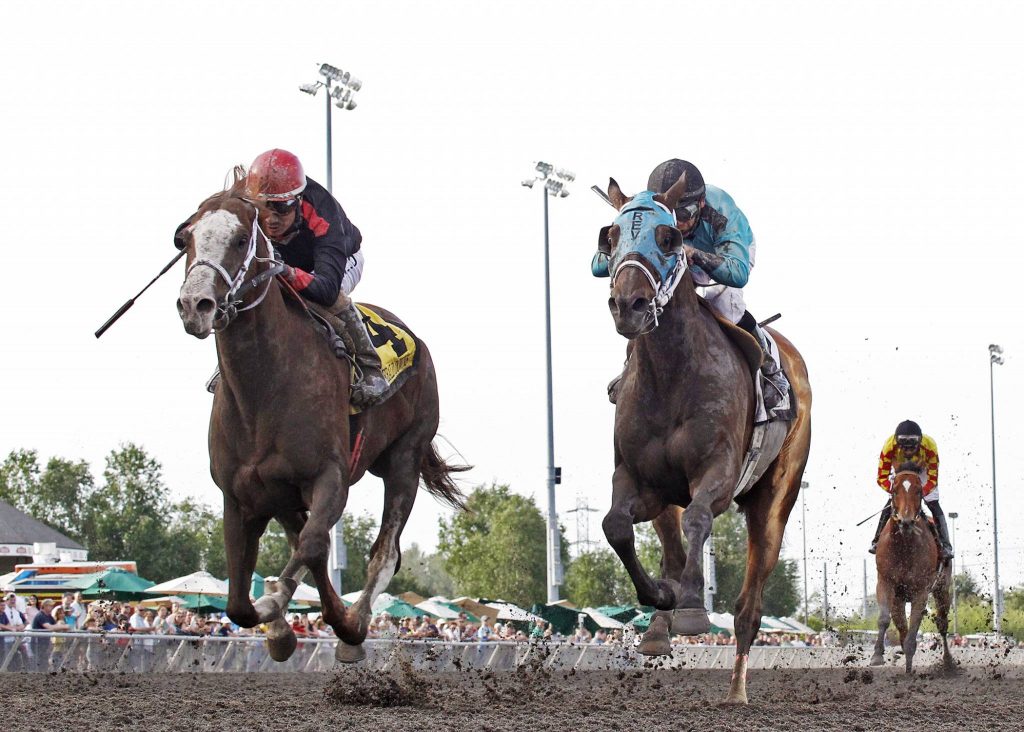 A 4-year-old chestnut with an unmistakable white face, Barkley collared Mach One Rules in the final strides for a neck victory in the 78th running of the $50,000 Governor’s Stakes for 3-year-olds and up at Emerald Downs.

The Governor’s was a virtual replay of last year’s rivalry between Barkley and Mach One Rules, when as 3-year-olds Barkley defeated Mach One Rules by two heads and a neck in three consecutive stakes races. And just like last year, it appeared Mach One Rules was headed to victory—only to have Barkley come and take it away from him late.

A giant overlay at odds of 16-to-1, Mach One Rules swept past a tiring Prime Engine in mid-stretch and was within mere yards of turning the tide on his old nemesis, but it wasn’t to be.

With nowhere to go into the stretch, Barkley was angled out for racing room at the eighth pole and again showed a tenacious will to win, finally collaring Mach One Rules in the shadow of the wire.

“When I moved him outside, he exploded,” Matias said. “He knows where the wire is. He’s a special horse.”

“You could not have asked for a better ride from any jockey in the world,” Belvoir said. “I have to praise Javier.”

A Kentucky-bred by Munnings, Barkley is 7-2-0 in nine lifetime starts with earnings of $181,075, including $27,500 for Sunday’s victory. His only defeats were by a head to Opportunistic in the 1 1/8-mile Emerald Downs Derby and a second to Prime Engine after getting wiped out at the break in a 5 1/2-furlong  allowance race last month.

Canadian shipper Distinctiv Passion, the 11-to-10 betting favorite, bobbled at the break, rushed up to battle with Prime Engine through fractions of :21.96 and :43.86, but gave way readily on the turn for home. That left Prime Engine with a clear lead of 1-½ lengths into the lane, but the 5-to-2 second choice began to weaken after five furlongs in a sweltering :55.74, and Mach One Rules took the baton from there.

Togrammashousewego, with Rocco Bowen riding at 118 lbs, rallied from last to finish third and paid $3.60 to show, while Prime Engine, Sabado Alegre, The Press and Distinctiv Passion completed the order of finish. 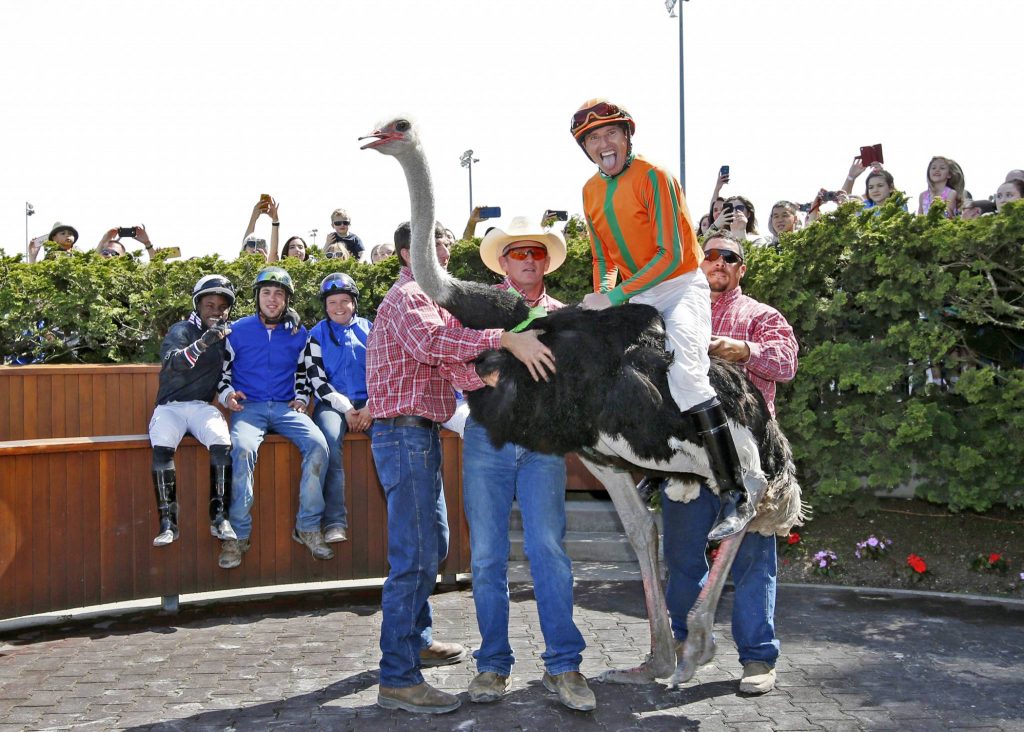 Jose Zunino aka The Ostrich King

Ostrich racing and camel racing helped attract an overflow crowd Sunday to Emerald Downs, as local freeways and access roads were jammed with fans coming to see the spectacle.

In the ostrich race, jockey Jose Zunino proved he was adept at riding more then Thoroughbreds with a convincing triumph aboard Atta Boy Toy, and in the camel event, jockey Rocco Bowen romped to an easy win on Harbor the Hump. Both races were one-sixteenth mile in distance.

Hedrick’s Promotions of Nickerson, Kansas, stage these exotic animal races throughout the country, and judging by Sunday’s turnout it will be an annual event at Emerald Downs.

NOTES: Belvoir now has a record five wins in the Governor’s Stakes (Red Eye Express (1974), Wasserman (2007 & 2008), Assessment (2010) and Barkley. That’s one better than Charles Essex, who saddled Handy N Bold to a record four wins in the Governor’s (1999, 2000, 2001, 2003). Coincidentally, Essex finished third Togrammashousewego in Sunday’s race. . .The youngest owner at Emerald Downs and perhaps America was victorious Sunday as Czech Chick ($16.40) prevailed in race three for 1-year-old Emily Kubinova Rosales. Eliska Kubinova, mother of Emily, rode the Oregon-bred filly for trainer Leonardo Guerrero. . .Kubinova, Matias, Rocco Bowen and Juan Gutierrez each rode two winners Sunday. . .Matias is No. 7 all-time with 29 stakes wins at Emerald Downs while Belvoir is No. 4 among trainers with 41 stakes wins at EmD. . .The classy 7-year-old gelding Mike Man’s Gold improved to 13-for-34 at Emerald Downs and surpassed $250,000 in career earnings with a gate-to-wire victory in 1:08.12 for six furlongs. Bred and owned by Keith and Jan Swagerty through most of his career, the Liberty Gold gelding currently races for trainer Joe Toye and owners Greg Conley and Chuck Conley. . . Emerald Downs observed a moment of silence for Don Munger prior to Sunday’s races as Snooper Dauper, an 8-year-old son of Nacheezmo owned and bred by Munger was paraded in front of the grandstand. . .Washington-bred 5-year-old gelding Percy’s Bluff had an eight-race win streak snapped Sunday, finishing third in a 1 1/8-mile turf race at Golden Gate Fields. . .Live racing resumes Friday with first post 6:30 p.m. and includes a $3,748 carryover in the $0.20 Pick 7.
–##–