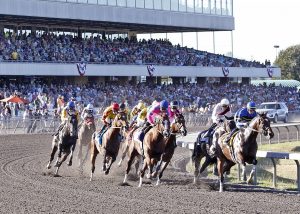 A Longacres Mile/BC Premiers sweep is worth $50,000

AUBURN, Wash. (March 2, 2017) – Emerald Downs and Hastings Racecourse in Vancouver, British Columbia have announced enhanced bonuses for any horse that sweeps the tracks’ major races of 2017.

The $125,000 bonus program includes signature events for 2-year-olds, 3-year-olds and older horses, and would be paid in U.S. funds:

“This demonstrates a strong commitment to promote horse racing in the Pacific Northwest,” Ziegler said. “It’s a natural extension of the program we began last year for 3-year-olds,” Ziegler said.

“I think it’s great that we are working together to create added value to our stakes programs,” said MacDonald. “We hope these bonuses will increase the quality of these races at both tracks.”